Coca-Cola reported profit decrease in the second quarter of 2014. The financial report come in spite of the increased volume of marketed production. In the second quarter profit of Coca-Cola estimated at 2.6 billion USD, or 0.58 USD per share. A year earlier, the success of the company was 2.68 billion USD (0.59 USD per share). When excluding one-off effects, profit giant is 0.64 USD per share. The revenues for the period were 12.57 billion USD, which is a decrease of 1.4% on an annual basis. The elimination of currency effects increased earnings by 3% annually. The expectations of analysts was for earnings of 63 cents per share on revenue of 12.83 billion USD.

In the second quarter, Coca-Cola has managed to achieve 3% higher volume production. Sales of carbonated soft drinks have recorded an increase of 2% in volume after the first quarter of the year was recorded first collapse in sales since 1999. The company bind growth in volumes sold under the sponsorship of the World Cup. It has helped to increase sales of the leader among the company’s soft drinks - Coca-Cola, with one hundred and brand Sprite 6%.

After publication of the report for the second quarter of Coca Cola shares took down, briefly fell with 3% to 41.15 USD share. 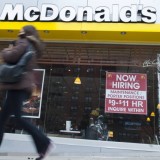